How about a Cessna instrument panel?

Our Virtual aviation club KVLS has recently been invited to participate and present flight simulation at the Ljubljana Airport Festival (a day for the airport workers’ families and friends). This year, I wanted to show something a bit more than just FSX virtual cockpit on three monitors. Something  resembling more like a flight simulator… I know but A320 is far from finished! Next most obvious thing was Cessna 172 cockpit or at least instrument panel. There was not much time but I already had Pro Flight Cessna yoke, throttle quadrant,  spare monitor, enough plywood leftovers from A320 build and those awesome freeware TheGaugesFactory. These gauges are just to good not to use them. Decision fell and I stared making Cessna 172 basic instrument panel.

First I needed instrument panel dimensions and plan. Hopefully there is quite a few of them on the Internet. 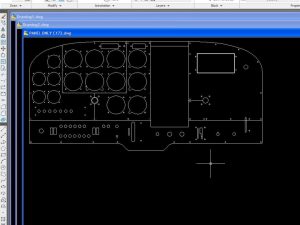 For the base plate, I selected Polystrol plates because I already had some and they are easy to process and glue. The cutting of instrument holes is followed. 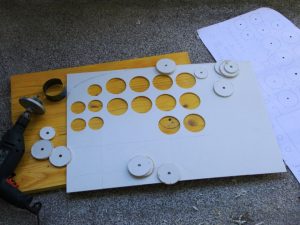 I couldn’t find the rest of smaller gauges like oil temp/press, fuel flow/EGT and AMP/VAC. Does not matter, I’ll make some still pictures for them just for the looks. Same goes for navigation that won’t be used this time. Thanks to Laurent F. without them that wouldn’t look this good. It’s unfortunate they are gone!

And wooden frame holding stripped monitor. Due to the size and position of the monitor, the yoke axis must be 8-9 cm lower than in reality! That was difficult to accept. 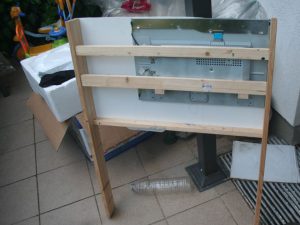 Front panel painting followed long in the night. Unfortunately the lack of time didn’t allow installation of all the switches, gauge bezels and proper glare shield, however … after installation at the event area we made this. 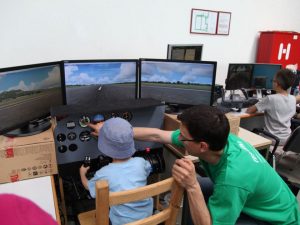 The last detail was ButtKicker which added engine vibrations and many hard landings.

We had quite some interest especially among kids. Believe it or not, but some real pilots were impressed. I guess if you move gauges and instruments from virtual cockpit to lower instrument panel things immediately look more sophisticated. Interesting what can be done in eight hours. There is still room for improvements for the next year.

How about a Cessna instrument panel?