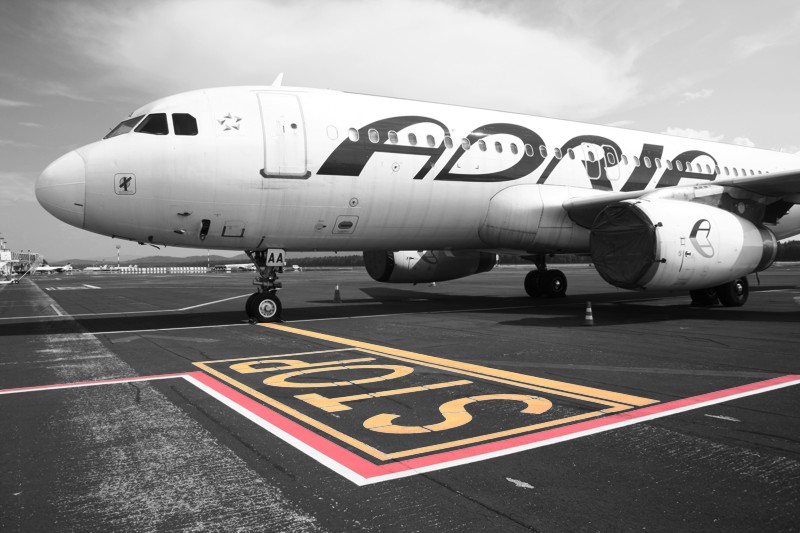 A sad day for Slovenian aviation, Adria airways went bankrupt today after 58 years. What a big loss for Slovenia and European regional aviation.

The spirit of this airline inspired me and made me follow into this aviation hobby. The support of Adria employees was very helpful and without it, I guess much of this would not be possible. 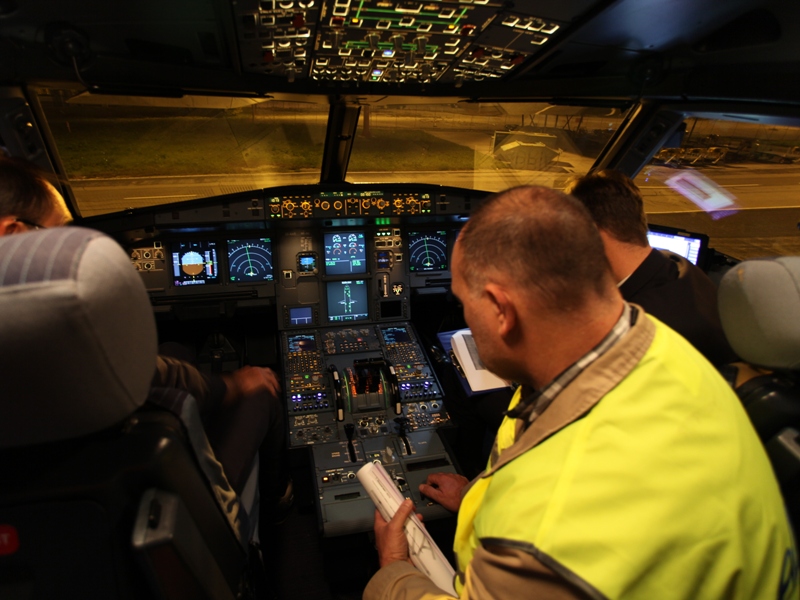 The story of Adria Aviopromet (Adria Airways) begun on 14 March of 1961 when the Executive Council of then People´s Republic of Slovenia decided on founding the company Adria Aviopromet. The establishment was dictated by the growth and evelopment of Slovenian and Yugoslav tourism and the increasing interest of foreign tourists. At that time JAT as the only airline during this period, could not meet all the needs so the new airline could provide additional services. 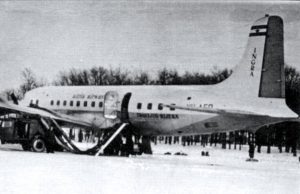 Few months later 1.9 million USD contract was signed with KLM for four used DC-6B aircraft from Caribean KLM fleet. Financial guarantees where provided by the Slovenian government and Splošna plovba shipping company took care of the loan. On August 9, 1961 the first aircraft landed at Zagreb Airport followed by second on August 12 (YU-AFC, YU-AFD). The other two aircraft (YU-AFE, YU-AFD) followed later in April 18, and  28, 1962. At first all operations were performed from Zagreb´s Pleso Airport and were later moved to Ljubljana, when the airport was built in 1964. The captain of the first aircraft to land on Ljubljana´s Brnik Airport was Karel Rankel. 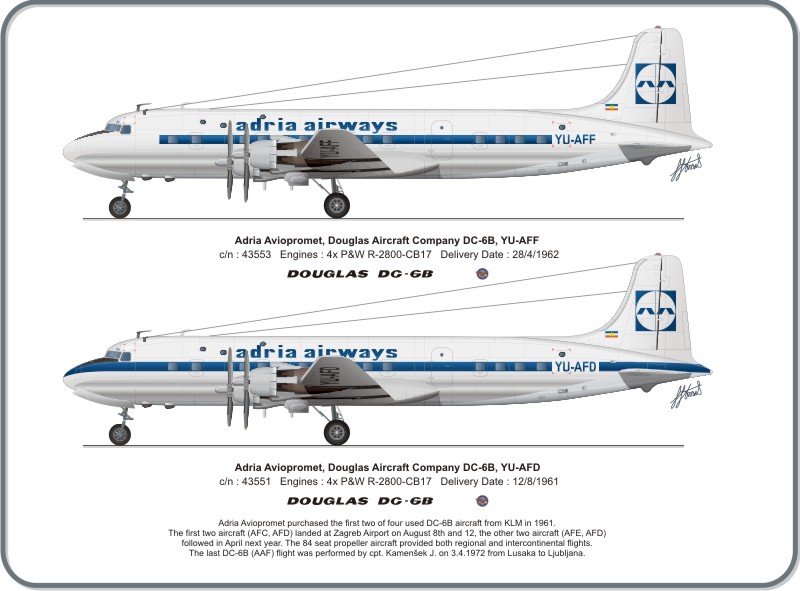 Captain Karel Rankel led the first flight across the Atlantic in June 1963. The flight from Shannon (Ireland) to Toronto (Canada) took 13 hours and 22 minutes and was performed by a double crew. The captain of the second crew was Branivoj Majcen. They set a Yugoslav record for the length of the flight and the flight was also considered to be the longest nonstop flight in that time. A major achievement was also gaining the landing permit for the US airports, which only a few charter companies got at the time. 63 cross Atlantic return flights were completed to New York, Washington, Boston, Cleveland,… 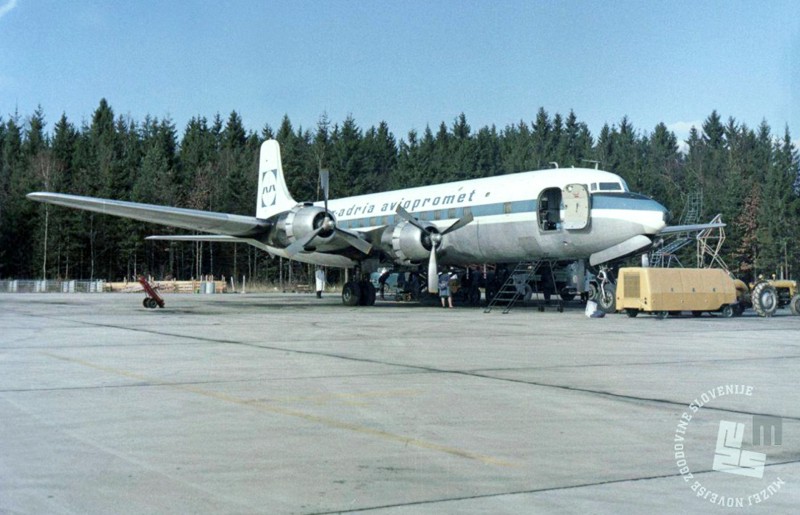 In those days Adria’s planes flew to all continents except Australia. In 1968 the first scheduled flight was introduced between Ljubljana and Belgrade. Unfortunately aging slow propeler aircraft like Adria “sixes” gradually became uncompetitive compared to the increasing number of faster jet aircraft. The economic situation of Adria started to deteriorate in 1967. Management was well aware of urgent fleet upgrade with jet aircraft but could not find an investor that would help them financially. Flight hours slowly decreased and Adria started facing first crisis which led to bankruptcy in  26.1.1968.

Adria got new management and in February 1969 they announced that company successfully reorganized and kept a positive balance. However a fleet renewal was still necessary and the management 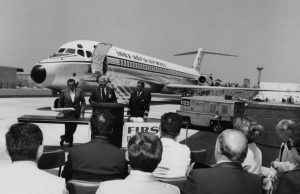 In 1972 Adria atempted to renew its transatlantic flights to the US and Canada using leased 184 seat aircraft Douglas DC-8-55. Due to high cost and strong competition over the Atlantic the flights were not profitable and wher soon withdrawn.

Adria continued to operate charter flights between European cities and the holiday destinations on Adriatic coast (Dubrovnik, Split, Pula and Tivat). Within a few years, Adria has regained its reputation for its accuracy, reliability and quality of service. It was renowned as one of the most reliable charter airlines in Europe. As demand on charter flights dictated further fleet expansion, a larger 135 seat aircraft DC-9-51 aircraft (YU-AJT) was purchased on May 12, 1976 and followed by another in May 24, 1977 (YU-AJU). On domestic market scheduled flight to Belgrade was successful and to satisfy increasing demand, Adria connected Ljubljana with all the major cities in Yugoslavia. 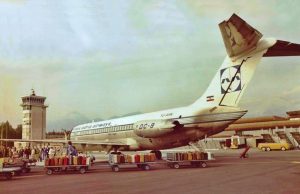 No everything was so brite, late 70’s were tough years for Adria regarding safety and aircraft losses. In just a few years another three aircraft where lost in accidents. DC-9-32 (YU-AJN) on November 23, 1974 over Belgrade Airport ex Surčin, DC-9-32 (YU-AJO) on October 30, 1975 near Prague Ruzyne Airport and DC-9-32 (YU-AJR) on September 10, 1976 near Vrobec Croatia. Adria found itself in difficult times.

Unfortunately, the eighties also began with accident which is still deeply embedded in the consciousness of the Slovenes. One of the new MD-81 aircraft (YU-ANA) flew into the side of a mountain near Ajaccio Corsica on December 1, 1981. That was fifth loss of the aircraft in a relatively short time which 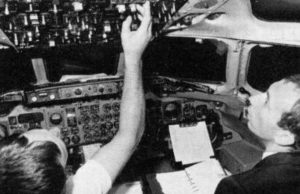 placed Adria to the bottom of the safety rankings. Many thought that accidents where linked to ex military pilots flying for Adria and their flying attitude. In any case Adria had to fundamentally reorganize its flight operations and pilot training to improve flight safety and restore its reputation. They worked hard to improve flight safety with new flight operation standards modeled after Swissair. Pilot training and assessment was doubled and Adria gave more attention to its flight school. All the effort was evident as Adria had no accident since. 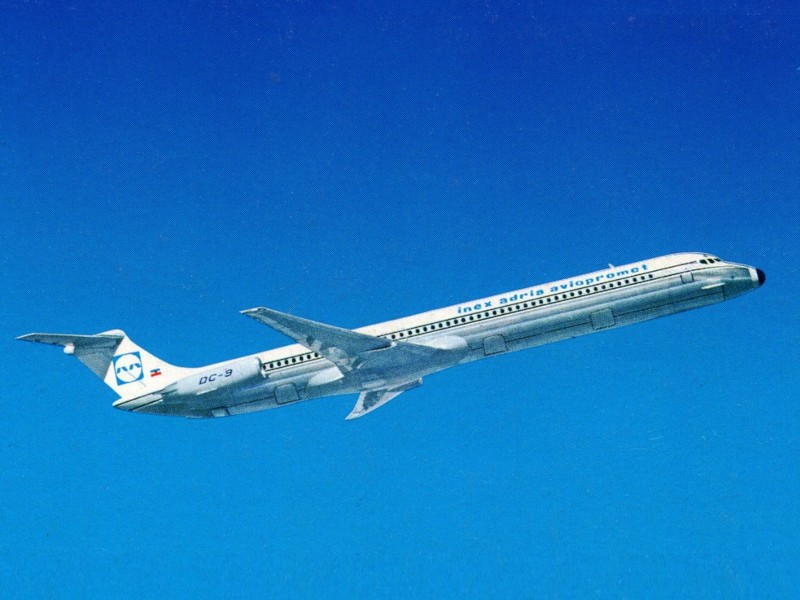 In 1983 the first international scheduled flights were established on the Ljubljana-Belgrade-Larnaca (Cyprus) route and in the following years Adria also expanded its network of scheduled flights to Munich, London and Paris. The number of passengers was constantly growing and reached one million, peaking in 1987 with 1,740,000 passengers. In 1982 Adria had a fleet of nine aircraft, 4x DC-9-32, 2x DC-9-51 and 3x DC-9-81 with a total capacity of 1124 passenger seats.

As Yugoslavia was preparing to stage the XIV. Olympics Winter games at Sarajevo, Adria expandet its fleet with two 48-seat de Havilland Dash 7 turboprop aircraft, intended for the Olympics flight service. Dash 7 aircraft would later boost regional airports flights. Adria received both aircraft on January 30, 1984 (YU-AIE, YU-AIF) and moved them to Sarajevo on February 5, just in time for the start of Olympic games. 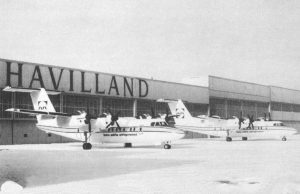 Inex-Adria Aviopromet (Inex-Adria Airways) also started commercial, organizational and restructuring programe from 1983 – 1986 after which Adria became its own company again and parted with Inexexport. Name was changed to Adria Airways.

Adria continually strived to stay ahead of competition with the latest advances aviation industry could offer and in 1984 already started planning fleet renewal with new generation aircraft. First talks were made with european aircraft manufacturer Airbus for buying wide-body A-310 aircraft. Adria management and technical department was visionary and eventually decidet for five of the emerging A320 aircraft. On July 12, 1984 contract for first three aircraft was signed. 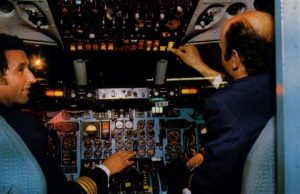 Leap into the future

For airline every new aircraft marks a turning point and arrival of new Airbus A320 was sure one of important milestone for Adria. The first Airbus A320-231 aircraft registration YU-AOA landed at Ljubljana Airport on May 18, 1989. This was undoubtedly most modern passenger airplane by date in the category of 150 seat aircraft.

With new aircraft Adria also unveiled its new updated logo and livery designed by Knut Marsen (Chief Graphic Designer at Airbus) and Samo Ivančič. Adria sign got more modern rounded shape and a larger print on the side of a white plane. Tail got a characteristic Adria “heart” or the shape of a linden leaf composed from letter A and its shadow.

Adria was the first airline to fly A320 powered with new V2500 engines, manufactured by International Aero Engines (IAE). IAE engines had a better fuel economy, A320 burned a quarter less fuel per passenger compared to DC-9 and MD-81/82 aircraft in the fleet.
Adria’s new flagship with 168 seats made its first commercial flight on May 22, 1989 on Ljubljana-Belgrade-Larnaca (Cyprus) line. In December same year Adria tested A320 on long route flight. The flight from Seychelles to Athens, took 7 hours and 40 minutes and ran past the distance of 5750 km. With this flight a new record was set for the longest flight with A320 at that time. 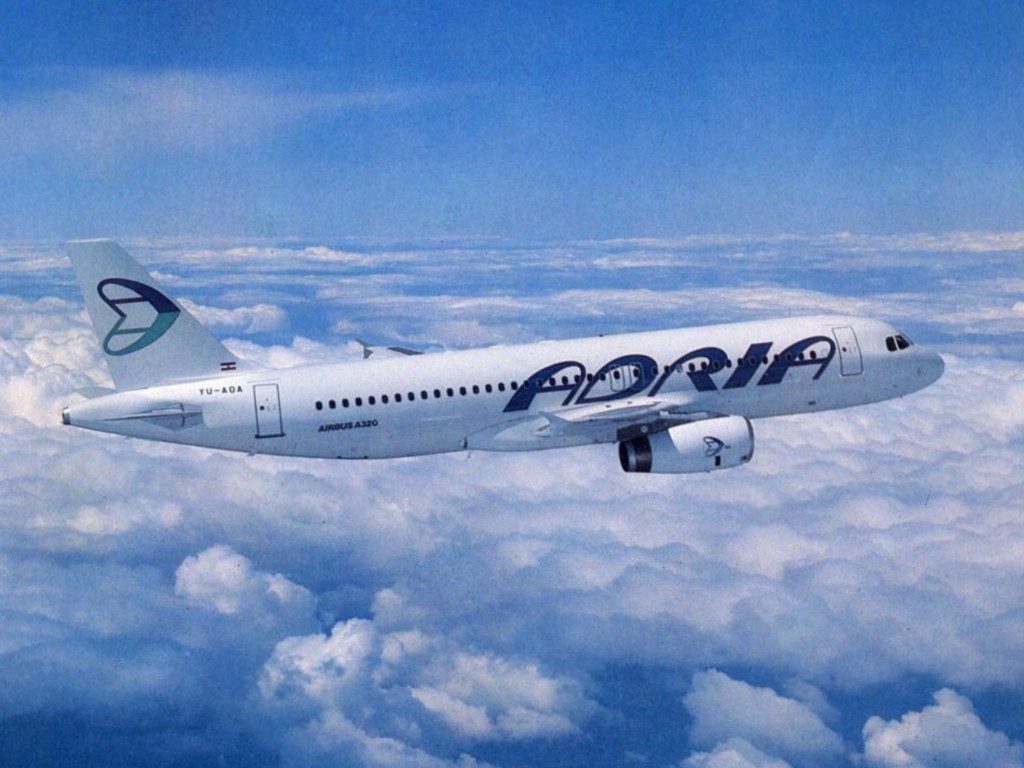 Adria introduced many new destinations from Ljubljana to primarily European cities and continued with seasonal charter flights, most often to Mediterranean tourist destinations.
While waiting for the second and third A320 delivery, Adria leased Cyprus Airlines A320 form April to October 1990 (YU-AOB). On September 11, 1990 another two A320 aircraft joined the fleet, YU-AOD and YU-AOE. The three A320 buses became Adria’s workhorses.

As Yugoslavia began to break up and the market became uncertaint, two additional A320´s expected to arrive in June 1991 were never delivered. The Republic of Slovenia 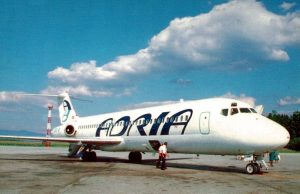 declared independence on June 25, 1991. Soon eafter Yugoslavia’s Civil Aviation Administration, which was still responsible for Slovenian airspace, banned Adria from flying for three months. Douring ten day independence war Yugoslav Air Force fighters jets attacked Adria facilities at Ljubljana Brnik Airport. In the attack damage was caused to hangar building including four aircraft inside and outside the hangar. Airbus A320 and de Havilland Dash 7 were severely damaged. Adria management quickly decided, despite the ban, to fly all the remaining aircraft still at Brnik Airport to the Klagenfurt airport in neighboring Austria. In 1991 Adria had a fleet of thirteen aircraft, 3x Airbus A320, 4x MD-82, 1x MD-81, 3x DC-9-30 and 2x Dash-7.

After 52 days of forced grounding Adria Airways resumed its activities from Klagenfurt Airport on January 16, 1992 with MD80 flight to Moscow. On January 30, the first aircraft returned to the home base Ljubljana Airport. However, the market was now significantly reduced. The majority of charter destinations to the Adriatic coast became inaccessible as a territory of other countries. The entire operating structure had to change dramatically. Some of the aircraft were leased to other airlines and the rest started flying on scheduled flights which now represented 70 percent of flights. 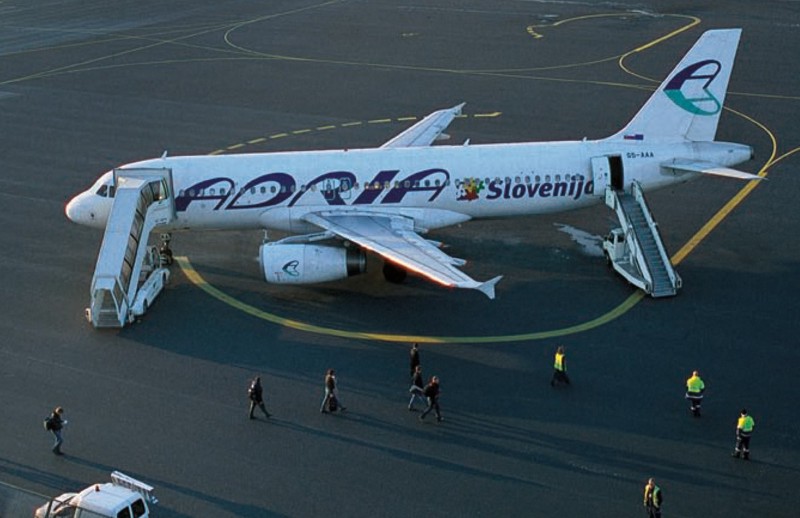 With Slovenia’s independence the entire operating structure of the company had to transform dramatically. Adria became Slovenia’s national airline and changed from primarily charter airline to mainly scheduled operator. Another restructuring program was needed with rationalization and modernization of the operations and fleet. Adria started cooperation with other European airlines and made a codeshare agreement with Lufthansa in 1995. 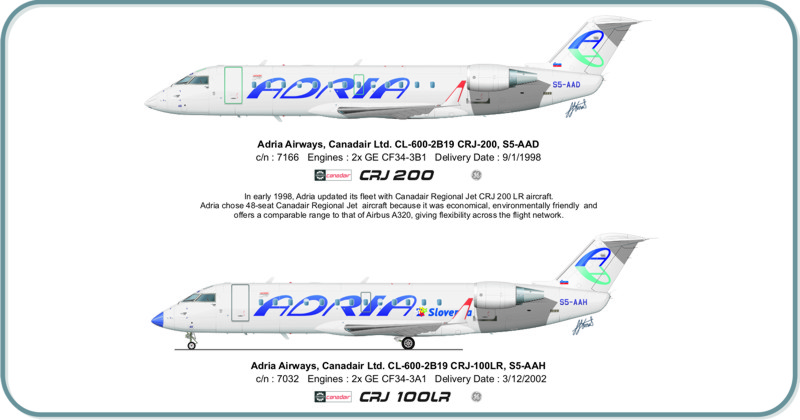 Fleet modernization and first aircrat orders started in 1997. Adria choose the Canadair Regional Jet aircraft as the best option, following the example of Lufthansa Cityline. CRJ was economical and environmentally friendly modern regional jet aircraft that offered range comparable to the Airbus A320 and made flexibility possible on the entire flight network operated from Ljubljana. First two 48-seat CRJ-200LR aircraft arrived in January 1998 (S5-AAD, S5-AAE) and third at the end of 1998 (S5-AAF). In the same period two Dash-7 and two DC-9-30 where sold.

Adria successfully enhanced the fleet with operational lease of two new 86-seat CRJ-900 aircraft in May 2007 (S5-AAK and S5-AAL), increacsing and optimising capacities on EU routes. Two more CRJ-900 followed in December 2008 (S5-AAN) and the fourth in January 2009 (S5-AAO). 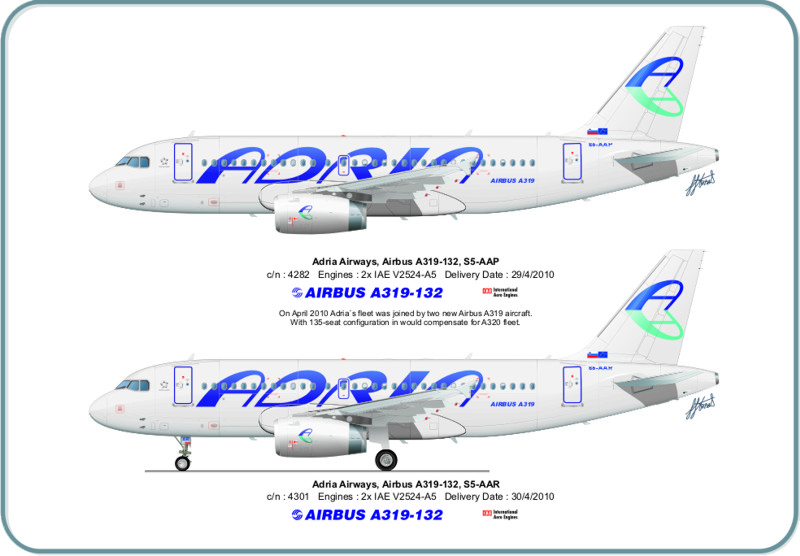